Launched on February 11, 2010, the spacecraft for the Solar Dynamics Observatory (SDO) mission started to capture ultra-high quality Sun imaging data for NASA. The SDO is a part of the Living With a Star (LWS) program that is managed by the Heliophysics Division of NASA’s Science Mission Directorate.

LWS’s goal is to scientifically understand all the naturally connected Sun-Earth systems that directly affect and influence life on Earth. SDO’s spacecraft images the Sun every twelve seconds in ten different wavelengths of invisible (to the human eye) ultraviolet light from an orbiting distance of about 36,000 km (22,369 miles) and a speed of 3.075 km/s (1.9 miles/s).

An excerpt from the video’s description:

“It’s always shining, always ablaze with light and energy that drive weather, biology and more. In addition to keeping life alive on Earth, the sun also sends out a constant flow of particles called the solar wind, and it occasionally erupts with giant clouds of solar material, called coronal mass ejections, or explosions of X-rays called solar flares. These events can rattle our space environment out to the very edges of our solar system. In space, NASA’s Solar Dynamics Observatory, or SDO, keeps an eye on our nearest star 24/7. SDO captures images of the sun in 10 different wavelengths, each of which helps highlight a different temperature of solar material. In this video, we experience SDO images of the sun in unprecedented detail. Presented in ultra-high definition, the video presents the dance of the ultra-hot material on our life-giving star in extraordinary detail, offering an intimate view of the grand forces of the solar system.”

Information about the Sun: 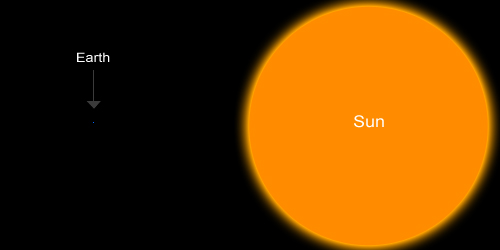 Some people think that the Sun is a star on constant fire, but that’s not the case. There can’t be any fire for there’s no oxygen. The light and energy that’s being produced and emitted by the Sun are being made by nuclear fusion reactions where Hydrogen fuses into Helium. About 620 million metric tons of Hydrogen are being fused (each second) in its core.

Extra info: what is the biggest star in our galaxy?

For many years, It used to be UY Scuti, although new research has revealed that there is a larger player around, and UY Scuti is smaller than previously known.

It would take you about 1071 years to fly (once) around UY Scuti in a usual commercial plane while flying at full speed (about 965 km/h or 600 miles/h), in comparison with the Sun where you would need only… about 190 days.

Also known as RSGC2-18 and Stephenson 2 DFK 1, it’s about 2.3 times larger than UY Scuti. You can see the comparison in the following video:

What is a star?

Kurzgesagt has a recent video that explains it well:

From the Smallest, up to the Universe. The two best Size Comparison videos you should watch