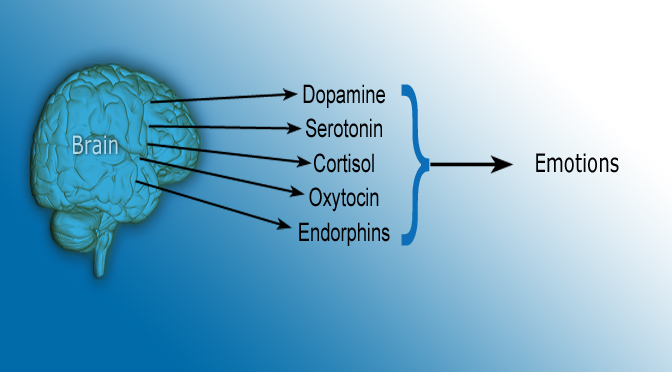 Sometimes, even if everything in your life seems under control, there are moments when something grasps you into its net of negativity. It can be conscious or subconscious. Things like unwanted or bad news, destructive criticism, frustration, over-stimulation with junk information, etc, can and will bring down your dopamine levels (while at the same time increase the production of cortisol), which will eventually bring down the levels of Oxytocin, Serotonin, Endorphins, and their corresponding receptor’s sensitivity to them. All of which can make you feel negative emotions, or, bring you down to the next stage: depression.

To understand this, first, you have to understand how their responsible biochemical mechanisms work. It’s all about the neurochemicals and their balance in your brain. The imbalance is caused when anything (like an act, information, dependency, negative thoughts and memories, etc) triggers a chain of neurochemical reactions in your brain.

In brief: How to avoid such negative reactions? -At best learn the mechanisms and avoid the interaction with the cause, or at least do not participate actively.

The list below will help you get a better idea of what’s happening in your biological system during various causes and biochemical processes, and the roles of the most important neurochemicals to help you understand the following paragraphs.

The roles of dopamine, serotonin, cortisol, oxytocin, and endorphins

A neurotransmitter that’s released by nerve cells to accompany and regulate reward-motivated behavior. Almost all types of rewards, such as pleasure, addictive drugs and behaviors, increase the levels of dopamine in the brain. Other dopamine-driven brain pathways are involved in motor control and the release of specific hormones. When the brain seeks the rewarding activities that it is used to, it lowers its dopamine levels to make you seek these activities, and eventually (if you repeat the addictive activity) reward you with an increase in dopamine to make you feel better. Dopamine is the king of addiction. (study 1, study 2, study 3)

A neurotransmitter that’s mostly (about 90% of it) produced and used in the digestive tract where it’s used to regulate intestinal movements. The other 10% is produced in the brain, specifically in serotonergic neurons, where it has various functions. These include the regulation of mood, aggression, appetite, wakefulness and sleep, among cognitive functions such as learning and memory formation.

It’s a hormone that mostly acts as the major all-around self-made poison of our biological system, however, it also has some helping properties. Cortisol increases during mental and/or physical stress, it highly suppresses the immune system, decreases bone formation, and activates a highly catabolic state. It also increases insulin resistance and inhibits protein synthesis (which inhibits cell growth), inhibits collagen formation, and decreases amino acid uptake by our muscles and cells generally. It’s the major player related to stress, aging, weakness, and overall system and mood depression. It also has an antagonistic effect over testosterone and dehydroepiandrosterone. However, it has a crucial role to keep you alive when there’s no food in your stomach, for it helps to catabolize your tissues by disintegrating the fats, proteins, and carbohydrates, to help you get the energy to live temporarily until you get some food. (study 1, study 2, study 3)

A neuropeptide hormone that’s being synthesized by the hypothalamus and secreted by the pituitary gland. It has antidepressant effects, it is responsible for triggering childbirth and the bonding between a mother and an infant, but also between human relationships. Plays a role in the regulation of trust, empathy, sexual arousal, and also anxiety. It can influence emotions and social behavior (study). Some studies show that in addition to dopamine, it also affects addiction and stress through the regulation of dopamine and other factors (study).

Neuropeptides which act as neurotransmitters and are being synthesized in the central nervous system and other parts of it, and also in the cells of the immune system. They are responsible for the reduction of the feeling of pain, and they regulate the feeling of well-being and pleasure, through co-regulation of dopamine and their neuro-messaging action. They are being secreted mostly as a response to exercise, pain, physical stress, fear, and also as a response to pleasurable activities such as sexual intercourse or laughter. (study 1, study 2)

Example: Negative emotions from the interaction with social media

Let’s say, you have posted a very truthful opinion based on your real-life experience and evidence, under a controversial video on social media. After some time you get a notification that someone has replied to your comment. You read it, and you realize that the person who replied bombards you with negative criticism (obviously not based on experience) in a very unethical manner. You’re in a position where you want to prove your point and reply to that person, while thinking whether to do it or not, based on whether it’s worth it or not.

In the above example, your choice doesn’t matter much, whether you choose to reply or not. The mechanisms of neurochemical imbalances have already taken place:

So, do you want to avoid the above-mentioned mechanisms from taking place to avoid negative emotions and lost mental focus on important subjects? If yes, you have to avoid the whole interaction in the first place. How? -Do not participate actively and focus only on the desired subjects in your life. Social media are full of negative-emotion-provoking aspects, especially if you actively participate. At least, take a good brake.

The dopamine-driven system of social media and addiction

The whole social media user-keeping and growing mechanism depend on dopamine, a neurochemical that’s responsible for all the aspects of psychological and physiological addiction. Social media are exploiting people’s biochemical vulnerability by social-validation feedback loops, which are all driven by dopamine. Any positive interaction increases dopamine as a reward mechanism, but social media are not paying much attention to negative interactions. This is one of the reasons why Facebook still doesn’t have a ‘dislike’ button, for it would be a cause for decreased user activity on the platform, and it would cause less addiction to it.

Exactly as Chamath Palihapitiya (a former Facebook executive) said in an interview:

“We curate our lives around this perceived sense of perfection because we get rewarded [driven by dopamine] in these short-term signals: hearts, likes, thumbs up [etc]. And we conflate that with value, and we conflate it with truth. And instead what it really is, is fake and brittle popularity – that’s short term, and that leaves you even more, and admit it, vacant and empty before you did it, because it forces you into this vicious cycle [of dopamine-driven social-validation feedback loops] where you’re like, ‘What’s the next thing I need to do now? ’cause I need it back [the dopamine dose].”

Have you ever felt the need to constantly check your social media for new posts and/or notifications? That’s called addiction, and it’s driven by dopamine feedback loops. It’s the same mechanism that causes addiction to various substances, where your brain won’t give you that dopamine dose that you need to feel good until you take the substance.

The art of non-participation, for your well being

It may be hard in the beginning, but as soon as you understand how the neurochemical reactions work, you will be in the positive position of being able to actively choose what’s good for your psychological and physiological health, and what’s not. As you can see, even a small interaction with something mentally negative can cause an imbalance of your neurochemicals, leading to negative emotions, and in the worst cases, depression.

The example of social media interaction was just to give you an idea, I wrote about it because nowadays it’s a part of the life of most people and one of the first reasons for negative emotions. Other examples are not far away from the aspects of social media, for they have many things in common. Any other example is all about the interaction with negative triggers, for example unethical or pessimistic people and negative information, and the exaggerated negativity of mass media. The point of this article is to educate you on the mechanisms of action, for it’s the best way to understand what to and what not to do.

What about the interactions which you cannot avoid?

Let’s take as an example the working environments, which are, of course, among many other examples. It’s something that you cannot avoid in the first place, for you have to be there and participate in every assignment that’s given to you (in logical grounds). These mandatory participatory interactions may trigger negative neurochemical reactions, but there are some things you can practice to build a shield against them.

One of the best ways to enable such a shield is to work on the way you perceive and conceive things. Perception and conception can be literal and narrowed on one or a few aspects, but it can also be more general, wide-viewed, and open-minded. The latter may work as a shield.

An example and a solution

You’re at your work and the employer gives you a hard assignment that has to be done in one day, as soon as possible, by working together with another colleague who is one of the worst people you know, with whom you have an old story that you don’t even want to remember. After that there’s also another assignment that has to be done on the same day, so you’re already feeling stressed out for many reasons.

You start the assignment and after awhile your colleague starts to remind you of the past while criticizing you unethically. In that situation your choice can be to participate in his or her mood and damage your psychological balance, or, perceive that colleague as being a deeply ill psychiatric patient (which may be true, even if no one knows it). That perception can help you overcome taking his or her words personally, which eventually is going to have a less negative impact on your neurochemical reactions. To accompany such a perception in that example, you can talk with your colleague ethically and humorously, like you are his or her doctor, something that may help change that person to a better one, or probably eliminate his or her desire to continue bugging you. In the end this perception will become a conception, meaning that your colleague probably won’t be a negative trigger for you again.

A simple life-hack technique to ease off negative emotions, as soon as possible

Negative triggers are all around in our societies, especially in places populated with people (whether online or offline). People can be smart, empathetic, and optimistic, but they can also be dumb, jealous, apathetic, and pessimistic. And also there are the mass media, spreading negativity and fear (fear-mongering) daily. But, the decision of whether to actively participate or not, is clearly in your hands. Educating yourself on the mechanisms of action of negative emotions, can and will be the best way to avoid them. Also, training yourself on various action and perception related techniques helps to cope with the interactions.

Read also: How to rewire your brain circuits and change your life