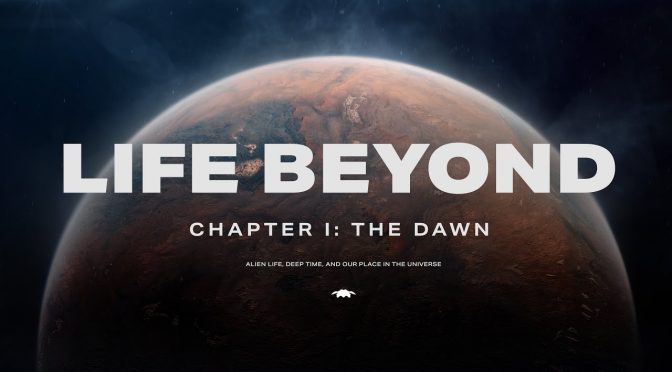 Two awesome documentaries/animations by melodysheep, the creator of the viral “Symphony of Science” videos. The quality of these animations is staggering, and the fact that you can watch them for free is fantastic. Don’t lose this chance.

The first chapter of the ‘Life Beyond’ series starts with alien life, deep time, and our place in cosmic history. A scientific approach that’s based on new discoveries.

“The biggest question of our time. Are we alone? Chapter 1 of this experience takes you to alien worlds and distant places in time and space, in search of where alien life might be hiding and what our place is within the history of life. After generations of wondering, the truth is finally within our reach. New research and technologies have brought us closer than ever to an answer – only a few decades in the eyes of some NASA scientists. The search has led to new discoveries that will blow your mind wide open and give a profound new perspective on human life. The deeper we look, the deeper we see into nature’s imagination, and the more we learn about ourselves. I hope stewing on these thoughts tickles your brain as deeply as it does mine. In upcoming chapters of Life Beyond we will explore making contact with intelligent life, the potential physics of alien biology, how to survive the end of the universe, and more.”

Chapter 1 of Life Beyond: The Dawn

The second chapter is called “LIFE BEYOND II: The Museum of Alien Life”. Here things get even more interesting. If you’d like to see how alien life could look like, you can see it here. It’s based on scientific logic with a tone of ‘why not’ creativity.

“What if there was a museum that contained every type of life form in the universe? This experience takes you on a tour through the possible forms alien life might take, from the eerily familiar to the utterly exotic, ranging from the inside of the Earth to the most hostile corners of the universe. New research is upending our idea of life and where it could be hiding: not just on Earth-like planets, where beings could mimic what our planet has produced, but in far-flung places like the hearts of dead stars and the rings of gas giant planets. Nowhere in the universe is off-limits. Only when we know what else is out there will we truly know ourselves. This thought experiment will give us a glimpse into what could be out there, how we might find it, and just how far nature’s imagination might stretch.”

Did You Know That There Are Fish That Can Fly? Meet The Exocoetidae!

The Holographic Universe And The Illusion Of Matter

If Google Was A Guy (All 3 videos)