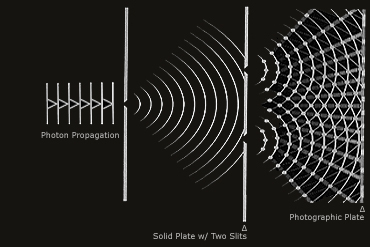 A new scientific experiment made by Dean Radin Ph.D, by using a variation of the classic double-slit experiment, shown at the Science of Consciousness Conference in Tuscon 2016 (Arizona), shows that consciousness indeed affects matter, therefore reality, no matter the distance between the observer and the apparatus.

After the first double-slit experiment, for many years scientists were debating over a enormously significant matter that has to do with consciousness and its relation to quantum mechanics. A significant number of very respected scientists from previous years came to the conclusion that consciousness indeed plays a crucial role in quantum mechanics and its measurement, meaning that consciousness has a direct impact on physical properties of matter, therefore the reality around each observer. Other scientists argued that something like that cannot happen, though saying that without actual research procedures, and relative ignorance.

Proving them wrong, consciousness does affect reality after all

A few years ago, Dean Radin Ph.D, at the Institute of Noetic Sciences, started a new experiment by using a variation of the classic double-slit experiment in various ways, where a simple observation by different people throughout the world effectively and significantly reduced the wave-pattern of particles in almost all of the cases, no matter the distance at all, proving that there is indeed a clear relation of consciousness with reality.

The great news is that the audience of the conference consisted of the most respected scientists and philosophers living today. Eventually we are getting closer to finding out and acknowledging that the role of consciousness is greater than the ignorance of a few, in a scale that’s unimaginably enormous. Enjoy the video!

The above study has been independently replicated by Gabriel Guerrer, a physicist and former researcher at CERN. ( link: https://osf.io/zsgwp/download )

The following is the abstract of the new replicated paper:

Motivated by a series of reported experiments and their controversial results, the present work investigated if volunteers could causally affect an optical double-slit system through mental efforts alone. The participants task alternated between intending the increase of the (real-time feedback informed) amount of light diffracted through a specific single slit and relaxing any intention effort. The 160 data sessions contributed by 127 volunteers revealed a statistically significant 6.37 sigma difference between the measurements performed in the intention versus the relax conditions ($p=1.89\times10^{-10}, \, es= 0.50 \pm 0.08$), while the 160 control sessions conducted without any present observer resulted in statistically equivalent samples ($z=-0.04, \, p=0.97, \, es=0.00 \pm 0.08$). The results couldn’t be simply explained by environmental factors, hence supporting the previously claimed existence of a not yet mapped form of interaction between a conscious agent and a physical system.

If Google Was A Guy (All 3 videos)